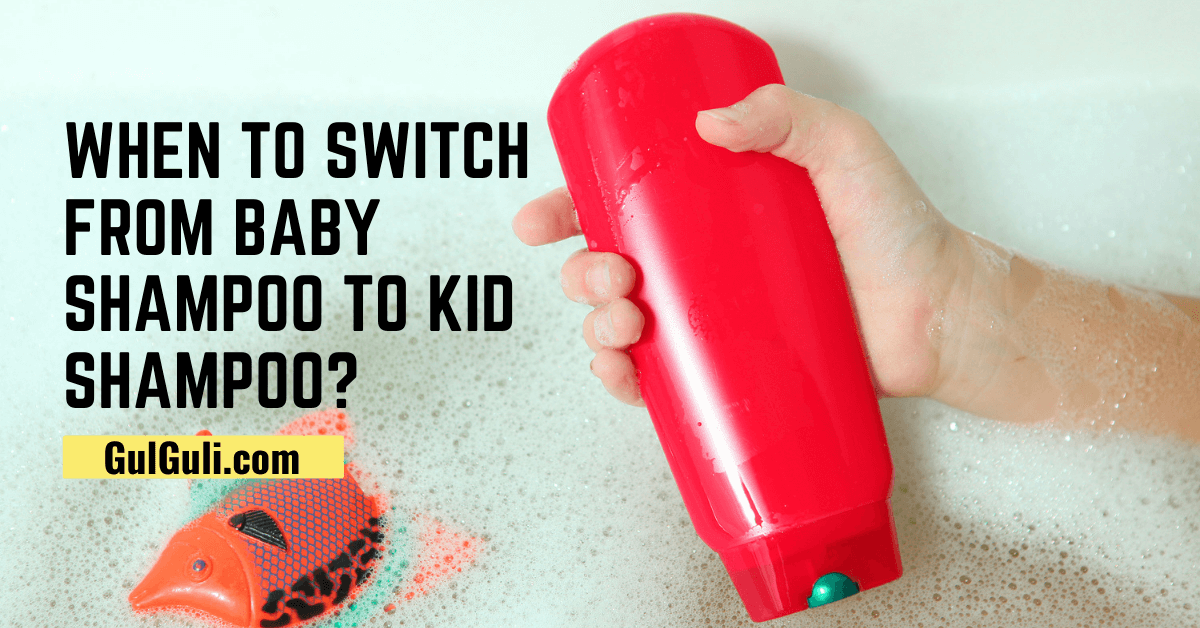 Many experts say that shampoo can be switched at age three, but some parents and physicians say younger children don’t need it. Opinions vary by country.

In Japan, they do not start to use shampoo until they are about two years old. This practice is called “no poo,” and keeps hair looking healthy even as it grows to an impressive length of six or more inches. Most Japanese women clip their hair up into a topknot for the day with no visible strands coming down from the back of their neck because they believe that allowing one’s natural oils down from the head is similar to “washing” one’s hair. These same women will often reapply a clear gel-like substance to the spots where strands have come free and “glued” to their necks. There is a product in Japan (and China) called “Neo Moni” that can be used to remove this gel, or one can simply cut it out.

In America, children begin shampooing at age two or three years old with enough regularity that most parents run into trouble when vacationing without shower facilities. Some U.S. doctors will prescribe shampoo to treat cradle cap (a greasy scaly scalp condition in infants), but only if the child’s medical history warrants it and/or cradle cap persists after applying lotion or cream several times over weeks—as well as fidgeting with the baby, soaping him or her up, blotting or scrubbing it off and checking to see if the condition has improved.

Parents and doctors alike agree, however, that children should never be shampooed daily—this can strip the hair of its natural moisture and oils, leaving it dry and prone to damage, breakage, and dandruff. Nor should kids be exposed to shampoos containing dioxanes as these are suspected carcinogens linked with kidney damage as well as developmental birth defects.

There is also some evidence that dioxane may interfere with brain function in unborn babies. The ADA’s Commission on Toxicology recommends those shampoos containing these substances not be used on infants or small children. These same shampoos are also not recommended to those with skin conditions, as they often contain high concentrations of salicylic acid that can cause irritation or further clog pores.

By age five or six, your child should have developed the coordination needed for shampooing. At this point, parents may want to introduce a gentle shampoo designed for children—most are tearless and hypoallergenic. Also, keep in mind that boys seem more likely than girls to be sensitive to strong fragrances found in most kids’ shampoos made with fruits like apples and/or strawberries (usually labeled “scented” rather than “fragrance-free”). If fragrance is an issue/source of discomfort consider using shampoos made with essential oils, which are not only less irritating to the skin but can also help control dandruff.